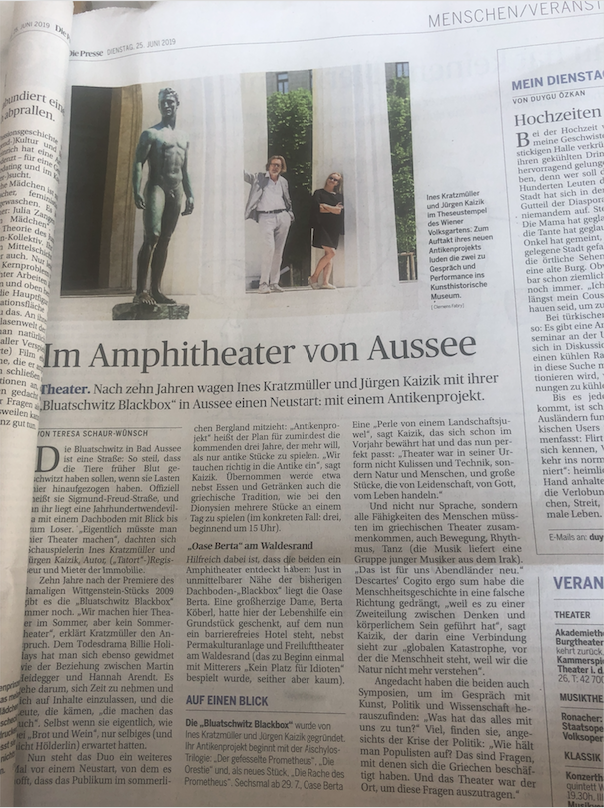 After ten years, Ines Kratzmüller and Jürgen Kaizik are taking their theatre project „Bluatschwitz Blackbox“ in Aussee on a new path: with a reimagined Greek mythology project.
The Bluatschwitz in Bad Aussee is a street: So steep that the animals used to sweat blood when they pulled their loads up the mountain. The street is now officially called  Sigmund Freud Street, and it runs next to a turn of the century villa with an attic overlooking the Mountain Loser. „Actually we should create a theatre here,“ was the first thought that popped into actress Ines Kratzmüller and Jürgen Kaizik’s mind.
Ten years after the premiere of their Wittgenstein play in 2009, the „Bluatschwitz Blackbox“ still exists and is going strong. „We perform theatre in the summer, but we are not a runoff the mill summer theatre,“ Kratzmüller explains their concept.  Their plays run the gamut between the death of Billie Holiday to the relationship between Martin Heidegger and Hannah Arendt. “It’s about taking  the time and truly getting involved in content, and our audience does that every year with great passion“.

Now the duo is once again reimagining the theatre with their „Antikenprojekt“ (antiquity Project) and are hoping their passionate audience will continue to support the theatre in the mountains. The project will at least span three years, which will consist of more than “just” recreating the classics.  „We dive right into this ancient world,“ says Kaizik. Three plays will be performed in a single day, as to hold with the Greek tradition (as in the case of the Dionysia). Between the plays the audience has the opportunity to eat and drink.The discovery of a nearby amphitheater at Oasis Berta, close to the “Blackbox” original attic location has aided their undertaking. The Oasis Berta property was donated by a  big-hearted lady, Berta Köberl, to Lebenshilfe Foundation, on which there is now a barrier-free hotel, along with the permaculture facility and open-air theatre on the edge of the forest. “ A landscape jewel,“ says Kaizik, which has proven itself as the ideal location in the previous year for a reimagined version of Schillers`  The Robbers (Karl and Franz were played by women) and is now a perfect fit for the new project: „Theatre in its original form without big technology, but nature and people, and great passion.”In any project based on the Greek theatre the play is not only about the language but a wide variety of human abilities which must be joined together such as movement, rhythm and dance (the music is performed live by two young musicians from Iraq who fled the war and try to continue their work and art now in Austria). „What these musicians contribute is new for us Europeans and a different approach then our western way of thinking“. We can learn a lot from each other by working with immigrants and sharing their culture. Just by joining forces, learning from each other and listening to each other will be a big step into the right direction.Descartes’ Cogito ergo sum has pushed human history in the wrong direction, „because it has led to a dichotomy between thinking and physical being,“ says Kaizik, who sees in it a connection to the „global disaster humanity is facing because we no longer understand nature and human beings.Kratzmüller and Kaizik have also created a schedule of talks around art politics and science to accompany the project: „What does all this have to do with us?“ They are convinced  in the face of the political crisis: „How do you stop populists? These are questions that the Greeks have dealt with. And the theatre was the place to answer these questions.“

A glimpse into the program of the Bluatschwitz black box Theatre in 2021 The theatre was founded by Ines Kratzmüller and her husband Jürgen Kaizik. Season 2020 is starting with the Sophocles Triology: Oedipus/today, Antigone and The secret of the sphinx.